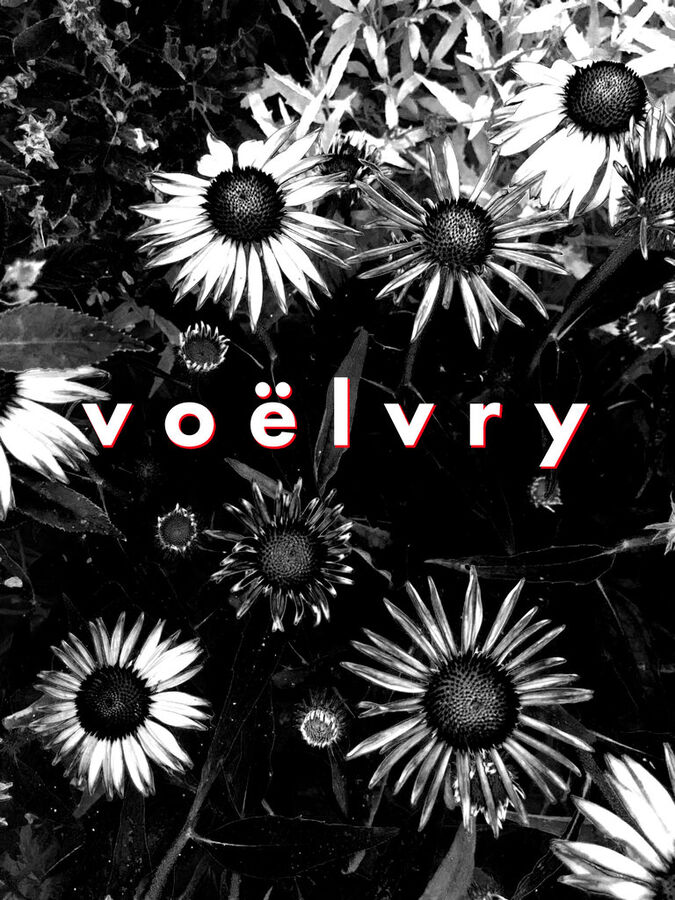 Amsterdam, like many cities across the world, is currently in the midst of another lockdown. Yet again, art lovers are facing another long exhibition drought. However, the bustling art scene has yet to bow out, instead opting for innovative ways to showcase the rich collections on offer across the city.

Amsterdam Art, which promotes the best contemporary art, recently opened a gallery at the Capital C building. However, after the lockdown was introduced, like other galleries, they were forced to close. Instead of shutting up shop, they chose to go down the virtual route, providing followers with an exclusive opportunity to view Kendell Geers’ latest venture. I viewed this virtual tour of Geers’ newest exhibition, titled Voëlvry, which provided me with an insight into his evolving artistic themes. Equally, I was able to see how new and unestablished galleries are making their exhibitions accessible in the face of forced closures.

Kendell Geers is a South African artist based in Belgium. He spent his formative years in Apartheid South Africa, and as a white Afrikaner, Geers belonged to the privileged white population. However, he deeply opposed Apartheid and became involved in the Voëlvry movement. White Afrikaners started the movement in order to re-appropriate the oppressive Afrikaans language so that it became part of the liberation struggle. Voëlvry, meaning ‘freedom’ was thus born as an Afrikaans punk protest movement in the 1980s.

Whilst the exhibition does not focus on the former South African Apartheid regime, it remains intertwined with his work. Geers asks a multitude of questions based on the everchanging concept of freedom that the Voëlvry movement wrestled with back in the 1980s. Firstly he asks, ‘what does freedom mean today? He then goes onto question the concept of human freedom in a world of human destruction: ‘How can we be free in a time of species extinction, when the animals are not free? When the plants are not free? When the Earth is not free? How can we speak about human freedom today when nature has been destroyed by us?’

Geers’ extensive use of flowers throughout his artworks reflect his contemplation of the freedom of the natural world. Multiple canvases feature bold, bright flowers which partially conceal text that confronts the viewer about our destruction of nature. One-piece reads ‘Here Lies Truth’ and another ‘Sea, Son, Sin, Hell’. 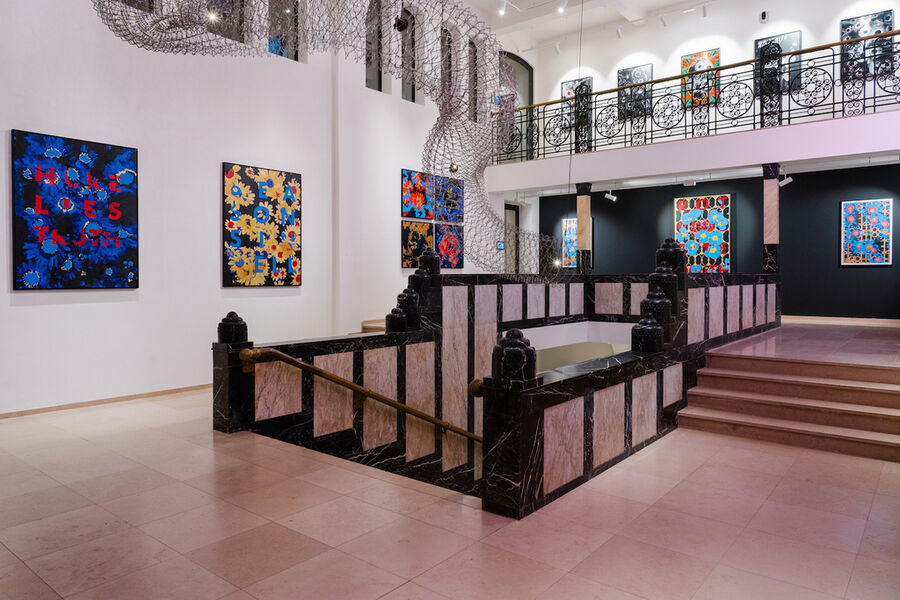 Geers explains how he is also fascinated by the connection between the Netherlands and South Africa. Dutch colonialism created new wealth, which then contributed to the demand and development of art in the Netherlands, through the ‘still life’. The ‘still life’ became a means of the wealthy displaying their material items, as expensive objects were often painted alongside flowers as part of this display of status. Geers was inspired by this Dutch tradition as he believes the use of cut flowers is the best way of capturing our current global predicament when it comes to climate change; in the paintings, they are at the height of their beauty and yet because they are severed from their life source they are also dying. He reinforces this sentiment by painting the centre of each flower red to resemble bullet hole wounds.

Geers’ most prominent ode to the Dutch still life comes in the form of his two neon pieces, both called ‘nature morte’, meaning ‘still life’ in French. He chose to use the French term because of the double meaning, as the literal English translation is ‘dead nature’. The neons are made up of flowers folded together to create a mirror effect; ‘the mirror is this idea of as above so below, the microcosm and the macrocosm reflect each other’. The composition of the flowers reinforces his focus on the destruction of the natural world; individually they are flowers, but together they form the shape of a skull. This also emphasises the double meaning of ‘nature morte’ and is a reference to classical Dutch still life paintings, which often feature a skull in the corner. 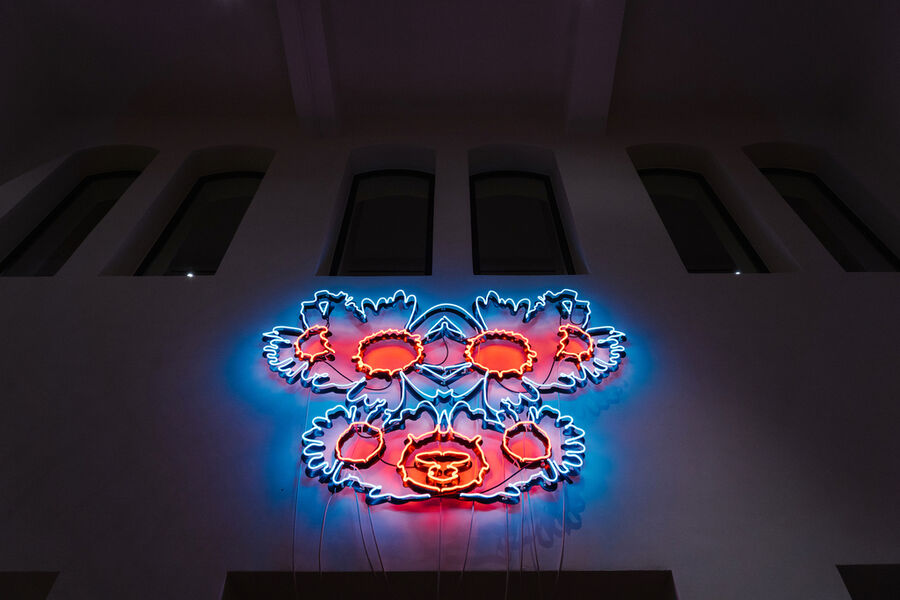 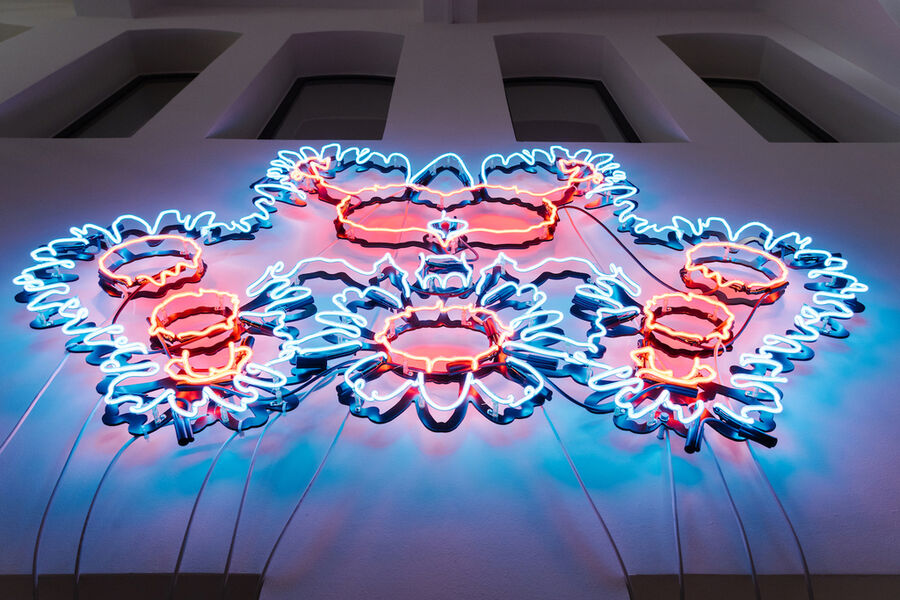 What do you believe in?

The exhibition ends with a simple neon that reads ‘What do you believe in?’, which Geers contorts into the shape of a spiral fossil shell. Geers says he chose the word ‘believe’ because it has ‘lie’ in the middle; the piece asks the fundamental question, ‘how much of what we believe in is a lie?’ 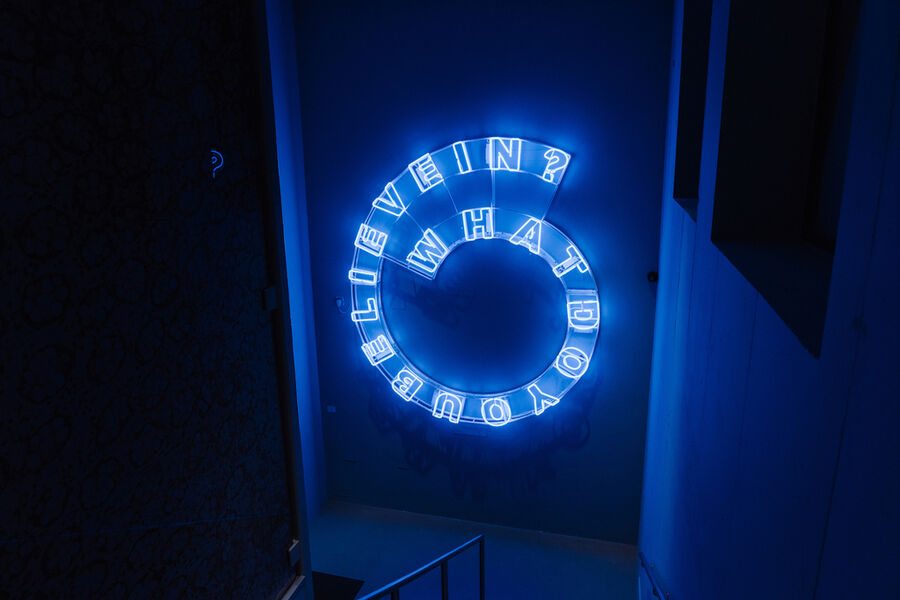 The virtual exhibition is certainly unique. At just 5 minutes and 20 seconds long, the video only introduces a few distinct pieces of Geers’ latest project. However, this is not to say it is underwhelming; the camera work exquisitely captures the gallery space so that the entire experience feels realistic yet intimate. Perhaps the most exciting feature of the virtual exhibition is that Geers himself leads the tour. This provides us with a unique insight into Voëlvry, as usually we would not be afforded the opportunity to meet the artist, let alone hear directly from him about the inspiration behind his latest artworks.

Whilst Geers is only able to go into detail about a few pieces, this aspect of the virtual exhibition undoubtedly primes any future visitors to this remarkable body of work. Equally, as the collection is on display until late April, the brevity of the video is no doubt deliberate; if anything, it acts as an amuse-bouche, tantalising the audience so that more people choose to indulge in a visit to the full collection once doors inevitably re-open. 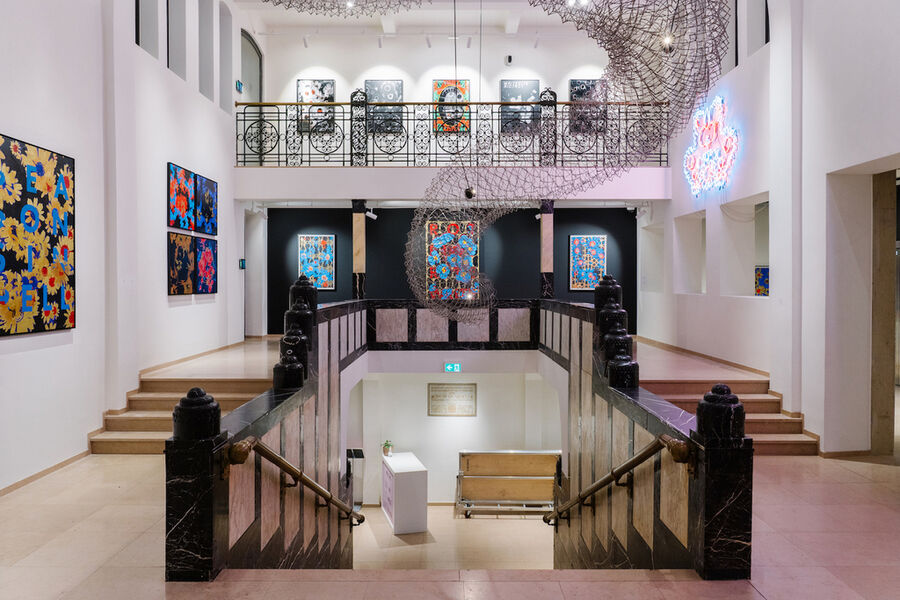 Voëlvry by Kendell Geers is on display between the 12th November 2021-22nd April 2022. Amsterdam Art Gallery, Capital C, Amsterdam. The video is free to watch on the Amsterdam Art Instagram page.

We use cookies on our website to give you the most relevant experience by remembering your preferences and repeat visits. By clicking “Accept”, you consent to the use of ALL the cookies.
Do not sell my personal information.
Cookie SettingsAccept
Manage consent

This website uses cookies to improve your experience while you navigate through the website. Out of these, the cookies that are categorized as necessary are stored on your browser as they are essential for the working of basic functionalities of the website. We also use third-party cookies that help us analyze and understand how you use this website. These cookies will be stored in your browser only with your consent. You also have the option to opt-out of these cookies. But opting out of some of these cookies may affect your browsing experience.
Necessary Always Enabled
Necessary cookies are absolutely essential for the website to function properly. These cookies ensure basic functionalities and security features of the website, anonymously.
Functional
Functional cookies help to perform certain functionalities like sharing the content of the website on social media platforms, collect feedbacks, and other third-party features.
Performance
Performance cookies are used to understand and analyze the key performance indexes of the website which helps in delivering a better user experience for the visitors.
Analytics
Analytical cookies are used to understand how visitors interact with the website. These cookies help provide information on metrics the number of visitors, bounce rate, traffic source, etc.
Advertisement
Advertisement cookies are used to provide visitors with relevant ads and marketing campaigns. These cookies track visitors across websites and collect information to provide customized ads.
Others
Other uncategorized cookies are those that are being analyzed and have not been classified into a category as yet.
SAVE & ACCEPT